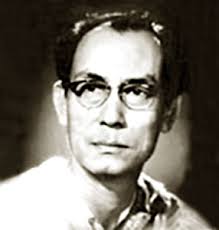 Today (October 31,2014) is the thirty-ninth death anniversary of one of Hindi film music’s greatest music composers, Sachin Dev Burman. SDB is one of my favourite music directors. O.P. Nayyar is another music director I have a special fondness for.

As I sit to make a list of SDB songs, I realised that I have blogged about many of SDB songs already that are personal favourites – be it as a tribute to the lyricist or the actors or the director or the singer!

So the songs in today’s list will be from movies that haven’t been mentioned on this blog…. Now that is such a pity cos that means Pyaasa or Kala Bazaar (two of my favourite SDB soundtracks shall not find a mention below. But well…)

So here we go!

1) Tum Na Jaane Kis Jahan Mein Kho Gaye (Sazaa, 1951) : The SDB- Sahir combine was a team that collaborated for more than fifteen successful films in the short period of six years between 1951-1957. This brief partnership however resulted in some of the finest musical scores ever.

The first song in my list is from a 1951 movie starring Dev Anand, Nimmi and Shyama. I have a vague recollection that Nimmi plays a mute girl ( some maid) and Shyama is a rich girl in love with the young Dev. The movie, in my memory, was nothing much to write about. But yes, this particular song, I have always liked and remembered. Nimmi remembering better, happier times with Dev as Lata croons “Tum Na Jaane Kis Jahan Mein Kho Gaye!”

My favourite numbers from this movie are the three songs picturised on the club dancer (Sheila Ramani). It was a toss-up between Dil Jale to Jale  and Ae Meri Zindagi Aaj Raat Jhoom Le (sung by Lata Mangeshkar) and Jeene Do Aur Jiyo.

I picked Jeene Do Aur Jiyo – because it is the first song featuring my favourite artists (Asha -Sahir – SDB).

Nau Do Gyarah was the directorial debut of Vijay Anand – who btw is an absolute master when it comes to song picturisation! The lyrics were by Majrooh Sultanpuri (The Sahir-SDB partnership had ended by this time!)

My favourite song from this movie – and I remember it partly because of the way it has been filmed – is the not-so-well known Asha – Geeta dance number picturised on Helen and Shashikala. Helen is absolutely lovely and the entire number is well choreographed! Note the swirls of smoke (coordinated to the beat) from Shashikala’s cigar, when the song starts – beautiful!

4) O Nigahein Mastana (Paying Guest, 1957): This Filmistan movie starring Dev Anand and Nutan again was very popular for its music. The songs are remembered to this day – especially – the Kishore -Asha duet Chhod Do Aanchal (Is it my imagination or have there been more than one remix of this song in the last decade or so?) and the Kishore solo, Mana Janaab Ne Pukara Nahin. Lata Mangeshkar gets to sing two melodious numbers, the sad Chand Phir Nikla and the bubbly Chupke Chupke, Rukte Rukte.

But the song of the movie is O Nigahein Mastana – Wonderful music and singing – the humming by Asha Bhosle is exquisite and yes, Dev and Nutan! They both look so wonderful in this entire movie. And there is Shubha Khote – in a grey role…

This Asha Bhosle – Rafi duet is mesmerising – the singing is spot on and so is the picturisation. One of the best roothna- manana numbers of all time,

6) Dil Ka Bhanwar Kare Pukar (Tere Ghar Ke Saamne, 1963) : Tere Ghar Ke Saamne is one of my favourite movies because of the light romantic story, fantastic performances by the entire cast – (especially Om Prakash and Harindranath Chattopadhyaya as the warring fathers) and the music.

And it is entirely based in a city I consider home – so it is good to see how the familiar localities where I have grown up in, looked way back in the early sixties.How lovely Delhi looks in this movie!

This song is a favourite as it is picturised in Qutub Minar – a monument I used to pass by daily once upon a time. Since the Qutub Minar has been shut for ages, I think the song has been shot in a set. However, the scene before the song is shot in the gardens in front of the Qutub Minar – when Dev Anand accompanies Nutan’s family for a picnic..

Mohd Rafi sings this lovely ditty melodiously and Nutan is amazing. Can anyone believe that Dev Anand is 40 years old in this movie and Nutan has just come off a maternity break? And Vijay Anand again scores in his picturisation – Dev Anand spotting Nutan (in his drink) and singing to her in the title track Tere Ghar Ke Saamne is unforgettable!

Nutan acted in another role in her comeback year – yes, as Kalyani in the Bimal Roy classic, Bandini. The music of that cinematic classic was also by Dada Burman.

Time constraints are forcing me to end this list right here rather abruptly…and I realise that this has inadvertently become a Dev Anand list. 😉

Utterly dissatisfied (there are so many more SDB songs that I love), I shall now sign off and probably post another list as a continuation shortly!

8 thoughts on “A tribute to S.D. Burman”