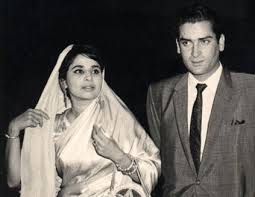 Today is the 50th death anniversary of Geeta Bali, the lovely, versatile, natural, spontaneous but underrated actress of the fifties. Born in Sargodha, Punjab in 1930 as Harkirtan Kaur,  she lived with her parents and a sister in Amritsar. Her father was a Sikh scholar and a singer and he encouraged both his daughters to learn classical music, dancing and horse riding.  Their family moved to Mumbai sometime in the forties and a young Harkirtan Kaur started working in movies to supplement the family income, first as a child actor and later as a lead actress. Despite a short career (that spanned hardly some 15 years or so), she managed to carve a niche for herself.

Natural, spontaneous, cute, comic and lovable, it is incredible that Geeta Bali is well-known despite her not having that many A-grade movies or having such a short lifespan.  Her acting in movies like Baazi, Baaz, Jaal, Anand Math and Baawre Nain is remembered till date.

In 1955, she married her co-star from movies such as Rangeen Raatein, Miss Coca Cola and Coffee House, the then-struggling actor and soon-to-be superstar, Shammi Kapoor. They fell in love during the shoot of Rangeen Raatein. Shammi Kapoor was not sure whether his elder brother and father would approve of this match (Geeta Bali was an year older than Shammi and had starred opposite both Raj Kapoor and Prithviraj Kapoor); so they got married in a temple with the producer-director, Hari Walia as a witness.

After marriage, Geeta Bali continued to work – though not as frequently as before, balancing work and family. She acted in Jailor in 1958, a movie that is considered one of her finest performances as she played a blind girl. She fell ill with small pox during the shooting of the Punjabi movie Rano (based on Rajinder Singh Bedi’s novel – Ek Chaadar maili si) Despite the best care, she did not recover and died on January 21, 1965. Rajinder Singh Bedi (also the director) shelved the movie after Geeta Bali’s death and never made it again. He mentioned much later that he kept the book on her funeral pyre and let it be burnt. Geeta Bali left behind her husband Shammi Kapoor and their two small children. Geeta Bali was only 35 years old.

Here are my favourite songs picturised on Geeta Bali, in no particular order. The list is restricted to 5 songs because of real life time constraints.

1) Chandni Raatein Pyar Ki Baatein (Jaal, 1952, Lata Mangeshkar and Hemant Kumar, SDB): Starting the list with a timeless haunting duet, which also happens to be one of the first few songs I watched Geeta Bali in, and fell in love. With the song, the music director, the lyricist and the actors. While the solo version is seductive, this duet version is plaintive, wistful and nostalgic. Geeta Bali looks lovely as she remembers the happy times spent with his lover and wonders where they have gone now (Jaane kahan ghum ho gaye, jaake woh agle zamaane…)

2) Tadbeer Se bigdi hui taqdeer bana de (Baazi, 1951, Geeta Dutt, SDB): This song has crept into many previous lists and finds its way here too. Baazi was a landmark movie – one of the first successful crime thrillers, it had many big names associated with it. Produced by Navketan films and directed by Guru Dutt, the screenplay and dialogues were by Balraj Sahni. It starred a very young Dev Anand and Geeta Bali. In this movie, Bali plays a dancer. The lyrics by Sahir Ludhianvi and the music by SDB are remembered to date. This particular song was a ghazal which was turned on its head into a club song by SDB; Sahir’s consternation can only be imagined.

3) Dil Dhadke Nazar Sharmaye (Albela, 1951, Lata Mangeshkar, C.Ramachandra): This one from a movie that had brilliant songs, one after another, which made my choice more difficult. I was torn between this and my favourite song from this movie, that peppy Shola jo bhadke, where she looks absolutely lovely. I picked this song because it is a solo and the focus is only on her. Bhagwan is very much there playing the guitar, but this song is Geeta Bali’s. Lata Mangeshkar sings this melodious number written by Rajinder Krishen and composed by C. Ramachandra.

4) Hum pyar mein jalne walon ko (Jailor, 1958, Lata Mangeshkar, Madan Mohan): This movie is considered one of Geeta Bali’s finest performances. Sohrab Modi plays the title role – that of a jailor who was benevolent and rational but turns into a tyrannical despot after his wife leaves him and their daughter for another man. A remake of the 1938 film of the same name, Geeta Bali plays the role of a blind girl who helps him mend his ways. Geeta Bali won plaudits for her performance and many were of the opinion that she should have bagged an award for the same.

Here is this wonderful melody from this movie:

As I end this list, I realise that most of the songs listed are sad, plaintive numbers. Not what I associate with Geeta Bali. She will always remain a vibrant, happy, bubbly actress to me.

So, as a last minute addition, here is a lovely, romantic Manna Dey- Suman Kalyanpur duet from her last film, Jab Se Tumhe Dekha Hai (1963). Yeh Din Din Hai Khushi Ke is picturised on Pradeep Kumar and Geeta Bali. It also has a bumbling Agha in the song. A sweet song where Geeta Bali is happy!

And as a bonus, a small audio clip where you can hear Geeta Bali humming the same song: