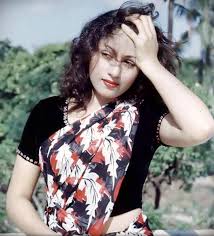 When I was growing up, I remember my grandmother often commenting that girls should not be too beautiful. She firmly believed that beautiful women had the toughest and saddest of lives. It did not make much sense to me back then but was reminded of it today when I sat to write this post.

One of the most beautiful actresses of the Indian screen, Madhubala would have turned 82 today. Born as Mumtaz Begum in Delhi in 1933, Madhubala is a name to reckon with in Indian cinema nearly 50 years after her death. She was at her peak at a time, when the competition was the toughest. There was the impish Nargis, the dramatic Meena Kumari, the graceful Waheeda Rehman, the expressive, versatile Nutan, and the danseuse par excellence Vyjayantimala – all ruling the roost at the same time. But Madhubala, with that dazzling smile and angelic face, is still remembered for her beauty.

In a short career, she acted in some memorable roles, however she could never establish herself completely, mainly due to choices controlled by her domineering/ over-protective father and her own poor health.

As a tribute to her on her birthday, here are some of my favourite songs, in no particular order :

1) Zindagi bhar nahin bhoolegi (Barsaat Ki Raat, 1960, Lata Mangeshkar & Rafi, Roshan): Okay, I have had a grouse with Madhubala’s movie choices. I just do not understand as to why she did not do many movies with heroes like Dev Anand and Shammi Kapoor? The reason – I am not a Bharat Bhushan fan and he was her co-star in quite a number of films. Despite my not being a Bharat Bhushan fan, I must admit that this movie is memorable – for Madhubala, those mushairas (the hero plays a poet – aah Sahir!) and its superlative, matchless music (especially the qawwalis). The Rafi solo is more popular, I prefer to watch this one (and listen to that one!) – just look how beautiful a sad Madhubala looks behind the charpai. (Back in the nineties Archie’s had  released a poster that used one of the pics from this film, if I remember correctly.)

2) Thandi Hawa Kali Ghata (Mr and Mrs 55, 1955, Geeta Dutt, OPN): This one is a lively, happy song, with Madhubala twirling around with an umbrella. She looks cute in a dress and those plaits and ribbons. Mr and Mrs 55 was a big success, mainly because of its music: choosing one song was very tough. I did not know which song to pick- this or Chal diye Banda nawaz or the romantic Udhar tum haseen ho or my other favourite, Neele aasmaani. I am not too fond of the story of this movie. I particularly did not like the end.

Madhubala plays Anita, a spunky heiress, who realises the meaning of marriage and gets tamed by the end of the movie. Guru Dutt plays a cartoonist, who is hired by her feminist aunt, Lalita Pawar, to pretend to be Anita’s husband till she gets her inheritance to her name.

A bit of trivia: R.K.Laxman drew the cartoons used in this movie.

In all, a light movie and Madhubala does a good job in a comic role.

3) Aye bhola bhala man (Jhumroo, 1961, Asha Bhosle and Kishore Kumar, Kishore Kumar): A typical song from a Kishore Kumar- Madhubala movie. Kishore Kumar movies in general (and especially the ones with Madhubala) had crazy, lively, naughty songs. This song is no exception. A cute number sung by Kishore Kumar and Asha Bhosle, this has Kishore Kumar and Madhubala going down in a raft. Madhubala plays a rich, city bred girl, who comes back to her village and falls in love with a villager. She is dressed in a rural style in this song but she looks very sweet and the song is also cute.

4) Dil mein sama gaye sajan (Sangdil, 1952. Lata Mangeshkar -Talat Mahmood, Sajjad Hussain): From a crazy song to a romantic one. Sangdil was adapted loosely from Bronte’s Jane Eyre. In this version, Dilip Kumar and Madhubala play childhood sweethearts who grow up separately and meet again after years. Dilip Kumar and Madhubala shared an amazing chemistry that lit up the screen instantly which is visible in this sweet, romantic song.

5) Chand Raat tum Ho Saath (Half Ticket, 1962, Lata Mangeshkar & Kishore Kumar, Salil Choudhury): One of the funniest movies made in Hindi cinema, this is a remake of the English movie, ‘You’re never too young‘. Kishore Kumar is at his craziest in Half-Ticket. The music by Salil Choudhury is very good. This song is a romantic number (of course Kishore Kumar is clowning around as usual), but Madhubala looks lovely and the song is sweet.

6) Pyar kiya toh darna kya (Mughal-e-azam, 1960, Lata Mangeshkar, Naushad): Hmm, this is probably the most famous Madhubala song, is it not? And that too from a film that she owned completely. As Anarkali in K.Asif’s magnum opus, that had been long in the making, Madhubala put in a strong, dignified performance. While this was not her last movie, the others that followed were not that great, making this performance her last great performance. So I guess this song had to be there. My favourite song from this movie is Mohe panghat pe nand lal chhed gayo re. I think she looks more beautiful in that, And what I liked was that the graceful group dancers and their steps are gentle and do not take the focus away from her.

Coming back to Pyar kiya toh darna kya, watch Madhubala’s performance here. Her eyes are full of fire and defiance as she proclaims her love to the emperor and the world. And then they are full of love when she looks at her lover. As she takes the dagger from the prince and keeps it at the Emperor’s feet, her eyes and her body proclaim the defiance. She is simply brilliant.

7) Main Sitaron Ka Taraana (Chalti Ka Naam Gaadi, 1958, Asha Bhosle & Kishore Kumar, SDB): Now for some more Kishore Kumar craziness. And there is Madhubala playing the pretty, naughty princess with a handbag, refusing to give the poor Mannu his paanch rupaiya and baarah anna! A lovely song from a very funny film.

8) Chand Zard Zard Hai (Jaali Note, 1958, Asha Bhosle -Rafi, OPN): This lovely song made me watch Jaali Note with much expectation. The music by OPN was good and plus it starred a lovely Madhubala and a dashing Dev Anand. However, the movie turned out to be very boring. However, Madhubala looked a million bucks throughout the movie and especially in this song.

9) Accha ji main haari (Kala Pani, 1958, Asha Bhosle-Rafi, SDB): Now this is a beautiful song that has been picturised so well and has beautiful actors (Madhubala and Dev Anand look soo good) and lovely lilting music. Since the time I watched this lovely song first on Rangoli, what I have remembered about it, besides a lovely Madhubala trying to ‘manao‘ a miffed but dashing Dev Anand, are the shocked, unblinking expressions of Agha, Mukri and Jankidas (?? not sure) and Madhubala’s interestingly styled blouse.

10) Aaiye meherbaan (Howrah Bridge, 1958, Asha Bhosle, OPN): Ending the list with my favourite song of Madhubala. She is seductive, tantalising and oh-so-gorgeous in this Shakti Samanta thriller. This is Madhubala’s number all the way. Oh yes, there are others on screen as well (including the cultured, enigmatic K.N Singh – a personal favourite) , but one doesn’t notice anyone but her – no matter how many times one watches this song. She is breathtaking!

Forty-six years after her death, Madhubala is still one of the most beautiful actresses to have graced the silver screen. It is extremely tragic that her life was cut short at the age of 36, devoid of any joy or happiness. She did not want to die – while she did not get to live long, her memory does!

10 thoughts on “My favourite songs of Madhubala”