Last month, at the Book Fair, I came across a book that refreshed many memories. I studied English literature, back in those days when English literature meant British literature only. So studying Indian literature in English or any other language was out of question. But there were many professors who would try to educate us, and inform us about such ‘out of syllabus’ topics, just in case we were interested.

So in one of those classes, I did learn (and strangely still remembered) that Durgeshnandini, published in 1865, was the first novel in Bengali literature. As I picked up the mint-fresh copy with the bright red cover and glanced through, a familiar name popped up. Prof Shirshuendu Chakraborti, the gentle professor who had taught me Renaissance drama had written the introduction.

So it was sheer nostalgia that led me to buy this book. And to my surprise, it was not confined on the to-be-read pile for too long. Perhaps because the cover of this particular translation is bright, friendly and inviting. So I read it last week and here is my review. 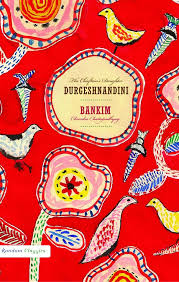 Form, Structure and Genre: By 1865, the English novel as a distinguishable literary genre had existed for just over two centuries (if one counts Bunyan’s Pilgrim Progress as the first published English novel.), making this a relatively new genre. Also the rise of the novel in England is directly related to the growth of the middle class. The period in which Durgeshnandini was published was similarly one of great change in the Indian society, which saw the rise of the middle class. After the suppression of the 1857 revolt, and the transference of the functions of the British East India Company to the British crown, colonialism was on the rise, especially in Bengal. English as a language and the English worldview was gaining importance. This enhanced interactions with the colonial masters and their language was to prove a great influence in the local existing vernacular traditions. The establishment of the British government in Calcutta also resulted in changes to local administration and education. Bankim Chandra Chattopadhyaya was a product of this middle class, in fact being one of the first graduates of the Calcutta University. Credited with being one of the key figures in Bengali renaissance, Bankim Chandra Chatterjee’s first novel, ‘Rajmohan’s wife‘ was written in English. The novel was to prove a breakaway form, compared to the traditional verse and prose forms. He followed this novel with Durgeshnandini, another novel but in Bangla.

The book can be classified as a historical romance. It is said that Chattopadhyaya used some local legends from the Arambagh region of West Bengal to craft this work. Set in the backdrop of the Pathan-Mughal conflict during the reign of Akbar (circa 1605 CE), the story is essentially a love triangle between Jagat Singh (the son of Man Singh, representing the Mughals), Tilottama (the daughter of a Bengali feudal lord) and Ayesha (the sister of the Pathan ruler the Mughals were fighting.)

A distinct feature of historical fiction is that it is a diachronic genre wherein two or more different time periods are juxtaposed. The level of complexity becomes higher when we read a tale in an entirely different time period. As is the case here, Bankim Chandra picks a legend from the region and tells a tale that took place approximately 250 years before his own time. And we are now reading it a century later. Bankim Chandra Chattopadhyaya is said to be responsible for the Bengali literary renaissance and that is what he does here. He borrows a modern literary structure from English and applies it to a local legend that he recounts in Bengali. And this comes across. He introduces several radical thoughts by deliberately going against established traditions and social practices. Nationalism was slowly on the rise and by extolling the virtues of chivalry and bravery in this book, the author could be seen as trying to foster the nationalistic spirit in his readers.

By having Ayesha fall in love with Jagat Singh, he is just short of advocating love across religion. It is also shown that Virendra Singh, the father of Tilottama, is in a secret relationship with a lower caste woman, Bimala. Both these socially forbidden traditions (love across caste and religion) are not flouted completely. Ayesha sacrifices her love in the end for Tilottama while Bimala, despite being married to Virendra Singh, lives like his maid.

Humour is introduced through an unlikely character – Diggaja, the Brahmin scholar, who is a dunce and a coward. In traditional literature, the Brahmin is a learned figure, deserving of veneration and respect but that is reversed here. If Diggaja is an idiot, then Abhiramaswami, the other learned Brahmin in the book (Bimala’s father) is not painted as a virtuous man but shown to have had illicit romances.

Another aspect that struck me was the use of existing verse traditions (Kavya in Sanskrit) in the descriptions of all women. The beauty of Tilottama and Bimala is described typically how a heroine in a Sanskrit poem would be described – with the use of similar metaphors and words.

The language is highly ornate and stylised. And for modern audiences not used to such descriptions, it seems a bit stilted. However, it is evident that it would have been well received by the audience of the time.

The story is not entirely a romance as the author puts in context the events. We know why Jagat Singh comes to this temple on that particular evening, and how he meets and falls in love with Tilottama. Bankim Chandra paints the lead characters as epitomes of a particular virtue. They do not change and are rather flat. Jagat Singh epitomised bravery and chivalry; while Tilottama represented beauty. Barring these two, the other characters are worth a closer look. Bimala, Usman (who may be Katlu Khan’s right hand guy, but was kind and soft-hearted), Ayesha all have flaws, but have good redeeming qualities. They are human and very relatable. For example, Katlu Khan was the villain of the piece, but just before he dies, he does inform Jagat Singh that he had not compromised Tilottama’s virtue. Ayesha, Katlu Khan’s daughter, is the one who saves Tilottama. She falls in love with Jagat Singh but in the end, sacrifices her love for him and helps Tilottama and Jagat Singh unite.

As a novel, Durgeshnandini may not be path breaking, if read in the context of this present day and age, but in no way is it boring.  It is fast paced and once we get past the first two chapters (which is where the reader is introduced to the background and the events preceding Jagat Singh and Tilottama’s meeting), the events take place one after the other at an express speed. Also, the author has the protagonists meet and fall in love right in Chapter 1 and then proceeds to tell us the relevant history. It is a short book, simple and lucid to read. Do give it a try.