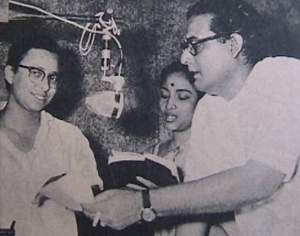 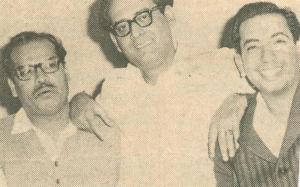 I must have been around 12 years old when I got hooked to old Hindi songs. I had begun to recognise different voices and started forming distinct preferences during this discovery phase. Asha Bhosle was and is my favourite female playback singer. Among the male voices, while Rafi was and is my favourite, I was also fond of Manna Dey and Hemant Kumar. It was rather a shock when Hemant Kumar died in September that very year.

Had he been alive, Hemant Kumar Mukherjee would have turned 95 today (June 16, 2015). So as a birthday anniversary tribute to him, here is a list of my favourite 10 Hemantda solos.

1) Tum Pukar lo, tumhara intezaar hai (Khamoshi, 1969, MD: Hemant Kumar): This haunting number from Khamoshi is one of my all-time favourites. Khamoshi was a masterpiece, be it Waheeda Rehman’s acting, Ashutosh Mukherjee’s story or Asit Sen’s direction. Gulzar’s emotional lyrics and Hemant Kumar’s mesmerising music also contributed heavily. This song is wonderfully picturised with the focus on Waheeda’s anguished face and Dharmendra’s restless pacing. What gives this song its ethereal quality is Hemant Kumar’s voice – anguished, throbbing with passion as it conveys the longing, loneliness and bechaini associated with unrequited love. Simply splendid!

2) Jaane woh kaise log the jinke (Pyaasa, 1957, MD – S.D. Burman): A deeply bitter, poignant song from a poignant movie. This is a party song, sung in the middle of many revellers, but is hauntingly bitter. Hemantda’s sweet rendition aptly conveys the heartbreak and bitterness of the disillusioned poet. Sahir’s lyrics are outstanding!

3) Na tum humein jano (Baat ek raat ki, 1962, S.D.Burman): This is a favourite from those Chitrahaar and Rangoli days. This song begins with a gentle humming and then moves off into an equally gentle set of vocals. It sounds gentle, melodious and is very romantic. The brief bit, that Suman Kalyanpur sings, blends in so well making this Burmanda composition an instant classic.

4) Teri duniya mein jeene se toh behtar hai (House no 44, 1955, S.D. Burman): Another song picturised on Dev Anand. Hemant Kumar sang a lot for Dev Anand. This is an interesting song. The tune is frothy and easy on the ears. (R.D. Burman is said to have played the harmonica.) However, Sahir’s lyrics are far from that – the words are poignant and pained as the protagonist prays for some happiness. The song starts off with Asha humming this song, and Hemant continues the humming. However, the end result is hardly discordant as Hemant Kumar’s gentle voice takes centrestage. Lovely!

5) Yeh raat yeh chandni phir kahan (Jaal, 1953, S.D. Burman): My introduction to this song was on the day Hemant da died when Doordarshan played it as a part of a compilation. Hemant Kumar’s gentle and swaying vocals, along with the Dev Anand and Geeta Bali’s expressions make this a romantic and seductive number.

6) Ya dil ki suno duniyawalon (Anupama, 1966, Hemant Kumar): A favourite from a sensitive film of the sixties starring Dharmendra and Sharmila Tagore. Reminiscent of Jaane woh kaise log thhe in its picturisation, this song has touching, sensitive lyrics by Kaifi Azmi. Hemant Kumar renders these sensitive words faithfully, fully capturing the pain and sympathy underlying them. There is a story about this tune that it had been composed for Guru Dutt’s Saheb Bibi aur Ghulam but did not get used there.

7) Raah bani khud manzil (Kohra, 1964, Hemant Kumar): This Biren Nag directed 1964 remake of Rebecca was nothing to write home about. Its pluses however included a charming Waheeda who acted well and  superb music by Hemant Kumar. I was torn between this song and that gentle and very romantic Yeh nayan dare dare; but decided to go with the less popular number of the two!

8) Hai apna dil toh awara (Solva Saal, 1958, S.D. Burman): Now for a number thats very different from all the other songs listed above. A complete chhed-chhad song, this one is flirtatious and light. Hemant Kumar, playback for an attractive Dev Anand, has sung it so well – very smooth!

9) Lahron pe laher (Chhabili, 1960, Snehal Bhatkar): This melodious, romantic number is from Tanuja’s debut film. While the video is not available, do listen to Hemant da’s gentle rendition.

10) Na yeh chaand hoga na taare rahenge (Shart, 1954, Hemant Kumar): Ending this list with one of Hemantda’s immortal compositions. This haunting song about immortal and undying love has a Geeta Dutt version (I prefer that one more) but this one is very good too. There is a haunting, aching quality to Hemant da’s voice – singing a song in his second Hindi film as a composer.  Memorable!