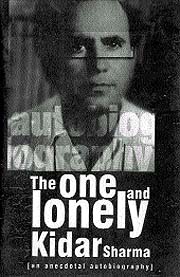 The one and lonely Kidar Sharma: an anecdotal autobiography resurfaced among a pile of read, unread books in one of my bookshelves during a massive book-sorting exercise recently. As I saw the title, it struck me that despite having picked it up ages back, it had not been read. Worse, still, it had been completely forgotten. A reason why this book may have been neglected could be that I am not that familiar with Kidar Sharma’s work. All I knew was that he was a legendary movie maker responsible for the careers of cinema greats such as Raj Kapoor, Madhubala, Geeta Bali, and Mala Sinha to name a few.

As the sub-heading of the book suggests, the book, edited by Kidar Sharma’s son Dr. Vikram Sharma,  is a compilation of anecdotes narrated by the author (up until the 1960s), as he looked back at his illustrious career, late in life. The manuscript of the book was approved by the author before his demise in April 1999 and the book was published in 2002.

What made this collection of anecdotes across 14 chapters such an interesting read was the wry humour and the frankness with which the author recalls his past. In no chronological order, the author recounts his childhood days in Narowal (sometime in the early years of the twentieth century). Wikipedia lists his date of birth as 12th April 1910, however I am not sure of its accuracy. The author clearly mentions that he was born on a rainy, stormy night and that he is a proud Leo. So he certainly is not April born. The year also is not mentioned. In what comes across as a childhood filled with much troubles of the financial kind (his father found himself out of a job many times and had a bit of a drinking problem), he found a pillar of support in his paternal grandmother and gentle mother. His equation with his father was rather interesting. It was Kidar Sharma’s forever grouse that he was not as good-looking as his father; while his father seemed to have a bit of a complex when it came to his successful eldest son. Due to the lack of family finances, Kidar had to dabble in little jobs such as book-binding, painting sketches from a very young age to support his education and then his family. During those bleak days (which saw the death of two of his brothers and a sister, Taro), what comes across is the optimism and unwavering faith in the Almighty that the family had. This unwavering faith is testified by Kidar in other phases of his life when that has paid off in dire situations.

Kidar Sharma’s family seemed to have rather high expectations from him, especially because he was a school and university topper. When he announced his own decision of becoming a film maker and ran away to Calcutta, after seeing D.K. Bose’s Purana Bhagat, his orthodox family was disappointed. They could not digest the fact that their son, a Brahmin boy from Punjab, wanted to enter a profession of “bhands“, pimps and prostitutes. Kidar Sharma may have done an MA but his mind was made up as to what he wanted to do; his parents’ disappointment not withstanding.

He recounts his struggling days when he borrowed Rs 25 from his newly wed wife and moved to Calcutta with an intention to train under D.K. Bose. In Calcutta, as he took on odd jobs (such as a screen and poster painter) in New Theatre, he was to meet three people who were to support him and also become close friends- the singer Kundan Lal Saigal, the actor Prithviraj Kapoor and Durga Khote. Prithviraj Kapoor and Kidar Sharma were to become very close friends. The next few chapters recount his journey in the world of cinema, filled with ups and downs, successes and failures. What comes across is is an unflinching commitment and passion towards his art as Kidar Sharma made a mark as a producer, director, lyricist and scriptwriter. At a time, when new talent was not necessarily encouraged by established producers and film makers, Kidar Sharma was an exception. He remembered promises made to other upcoming artistes during his own struggling days and kept them. Some examples of people who owe their careers  (other than the really big stars he launched in the 1950s) include an actress called Romola (whom a top producer had rejected for being too short) and Vasudev Bhatkar, a small-time AIR artiste (who made a mark as a music director calling himself Snehal Bhatkar – Snehal was the name of his daughter. This way he could continue his job in AIR and compose music for films!)

Of course, Raj Kapoor remains the biggest cinema star to have been given a break by Kidar Sharma. In an interview, Kapoor is said to have said this about his uncle and guru: “Kidar Sharma is a one-man institution who taught me all know about film-making.” As Sharma recollects his association with his favourite, the warmth and the loving relationship they shared is evident. The reason why Ranbir Raj Kapoor became the third assistant to his father’s best friend and uncle, Kidar Sharma is an interesting one in itself. Raj Kapoor, in his college days, was getting too distracted in interested in the opposite gender and this worried his father. His father was worried that Raj Kapoor had no focus or interest and was frittering away his time and he shared this concern with Sharma. Sharma was reminded of an interaction he had had with a six-year old Raj Kapoor and using this as the basis, he offered to teach him film-making and made him his assistant. He was very soon to realise that Raj Kapoor was more interested in appearing in front of the camera than behind. Of course, there is also the anecdote as to when Sharma, the hard task master, slapped Raj Kapoor on the sets of a film. To his credit, Raj Kapoor quietly accepted his mistake and kept quiet.

There is an equally interesting anecdote involving Tanuja. I had read about this in one of her interviews. In the book, Sharma mentions it too. It was during the shooting of Hamari Yaad Ayegi (1961), Tanuja was unable to get the nuances of a particular serious scene right. She kept getting it wrong and would start giggling. After a point, Sharma lost his cool and probably yelled at her. And that was it. Tanuja left the set in a temper, only to be dragged back to the sets by her mother Shobhana Samarth. In her interview, apparently her mom had smacked her for being unprofessional and got her back.

Sharma mentions that at the time of this movie, he was bankrupt and when this episode took place, he was in a way worried that he would not be able to complete the film. He had decided that he would shelve the film by evening. But she came back and the film was completed. He also mentioned warmly that the affection he received from the very same actress later on was heartwarming.

He also gives his version of how Geeta Bali was discovered – living with her large family in a bathtub. Not very conventionally beautiful, he did rate her to be one of the best actresses he had worked with.

This unconventional, fiery, arrogant film-maker was also responsible for the careers of Roshan, Mala Sinha and Bharat Bhushan. His association with the Children’s Film Society of India also gets a mention in the book. His children’s film Jaldeep (1956) won the Best Children’s film in the International Film Festival in Venice.

While the book proved to be a very interesting read – in terms of the information it imparts and the writing style, the lack of chronology does prove to be an impediment. I have a thing for dates and the lack of dates in the book did prove to be distracting. This minor gripe apart, laced with wit, humour and an innate honesty, The One and Lonely Kidar Sharma is a good read – a must for all cinema buffs.

3 thoughts on “Book Review: The one and lonely Kidar Sharma – An anecdotal autobiography”