A tribute to Shashi Kapoor who died last December had been long overdue but I did not want to draw up another song list. An unplanned break from work this week meant that suddenly I had time to read and watch some movies.  And when this movie and its music was analysed in a delightful book on S.D. Burman I recently read (review to be up shortly),  I knew I had found a Shashi Kapoor movie to review. So Sharmeelee it was to be. For some reason, the title of this 1971 Subodh Mukherjee movie is spelt as “Sharmeelee” (Should it not be Sharmilee?)

This was a movie I had not watched earlier, mainly because I am not so fond of Rakhee – well, I find her irritating. But surely a charming Shashi Kapoor and good music would offset a double dose of Rakhee, or so I thought.

Sharmeelee starts off with an introduction to the protagonist, Kanchan, a painfully shy young girl who has a golden heart and lives with her parents and her twin, Kamini (who is confident, boisterous and absolutely gorgeous) in some hill-station in Himachal Pradesh. 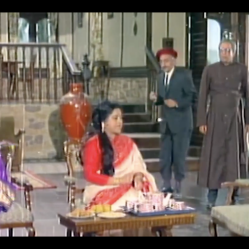 So shy is she that she is comfortable only with animals and birds. In front of the people she lives with, not one word comes out of her mouth. Her critical mother is desperately trying to marry her off (but to no avail, as everyone who comes to see her chooses Kamini over her). So shy is Kanchan that she has even dropped out of her school, whereas Kamini is in college, pursuing some degree. There is a local priest, Father Joseph (Nazir Hussain, in a role that he has reprised a million times), who runs some kind of dispensary, who is fond of her.

Kamini, when on some college tour to Kashmir, meets a young army Captain, and there is some chhed-chhad, gaana-bajana and bas, the Captain has fallen for her. However, the acquaintance and the romance is short-lived. Meanwhile, the kind priest decides to get his adopted son married to poor Kanchan. The son turns out to be none other than our dear Captain Ajit. 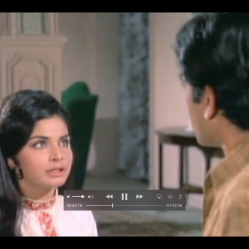 Mistaking Kanchan to be Kamini, he happily agrees but soon enough the truth comes to fore. Kanchan, despite being heartbroken, wishes for her sister to be happy and soon Kamini and Ajit’s wedding is fixed. It then turns out that Kanchan had a past boyfriend Kundan (keeping with her modern girl image) who is not so shareef who comes back to haunt her (a very young Ranjeet making his debut, playing a rapist!) a few days before the wedding. In a bid to escape from his clutches, Kamini kills Kundan by running a car over him. And then drives the car over a cliff, in order to escape from the police, who surprisingly land up there. 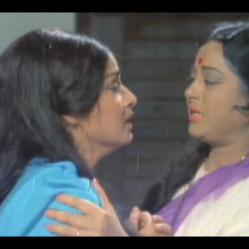 The marriage still goes ahead, with Kanchan as the bride. The shocked parents have conveniently not told Ajit or Father Joseph, after all khandan ki izzat mitti mein mil jaayegi. Kanchan protests tearfully but is forced to go along with the plan. She pens a letter to Ajit asking him to come for the wedding only if he is okay with this. Of course, the letter gets intercepted and never reaches him.

Much drama ensues. Upon being told the truth (by Kanchan of course), Ajit accuses Kanchan of killing Kamini to take her place and drives away (to his regiment Kashmir) in anger. The ill-fated Kanchan attempts suicide, only to be rescued by Father Joseph. Months pass, Ajit doesn’t come back. Kanchan lives with Father Joseph, who is furious with his adopted son and wants Kanchan to break off all relations and remarry.

The rest of the movie deals with what happens to the three main protagonists as they deal with their changed circumstances.

Largely unwatchable. I found all the characters irritating. Captain Ajit was an idiot through the movie who claimed to be in love with Kamini and ill-treated Kanchan till the penultimate scene when he had a sudden change of heart. Very convenient. Kanchan was infuriatingly servile, more of a doormat than shy! This is not how shy girls behave. Kamini had spunk (in the first half) but being the modern woman, she had to be shown as a wayward girl who smokes, drinks, has affairs and becomes a spy!

Shashi Kapoor is charming (but when he is singing songs or looking shocked). His Captain Ajit was just not likeable, for me to enjoy his acting.  Rakhee does her best – but again Kanchan deserves a whack and later Kamini does too! Less said about the annoying parents. Only Nazir Hussain as Father Joseph was tolerable.

The sole plus point of this two and half hour long film. Sachin Dev Burman’s composition is top notch. My favourite songs are Khilte hain gul yahan and the two sad songs Megha chhaye aadhi raat and Kaise kahen hum.

Sharmeelee is a movie you should skip, especially if you haven’t seen it. Listen to the album instead.