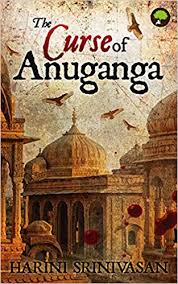 The month of May was a big one for me. My book, The Curse of Anuganga, a historical detective mystery, published by TreeShade Books was released then.

I suppose I can call myself a writer now. Though technically The Curse of Anuganga is my second book – the first being a small children’s story (The Wizard Tales: Adventures of Bun-Bun and His Friends) I had written six years ago (about to go into its second print shortly).

Interestingly this was also the time that The Curse of Anuganga was conceptualised. A conversation about historical detective fiction in India led to my being added to a Facebook Group – of writers who wrote a short story – detective- based in one particular period of Indian history within a stipulated period of time. (Thank you, Madhu)

The era I picked for this writing exercise was the Gupta era – and in particular, the period called the Gupta-Vakataka era – when the King Chandragupta II’s (375 CE – 415CE) influence as a ruler of Pataliputra even extended, by proxy, to the Vakataka kingdom which ruled over present- day Maharashtra through his daughter Queen Prabhavatigupta.  The story that came about from this exercise was called The Gatekeeper’s Son.

It is thanks to Vineet Bajpai of TreeShade Books, who liked and believed in the synopsis of The Gatekeeper’s Son that it has now become a full-fledged novel. Converting a 10,000 word story to a 70,000 word novel while keeping the basic premise (or as in this case the whodunit) same was rather tough.

Newer characters, subplots, scenes had to be introduced and woven in seamlessly. It also meant that I had to revisit the Gupta-Vakataka period  to refresh my knowledge of the period.

In my experience,  painstaking research, irrespective of where the story is based, is needed, One needs to read – a lot – to be able to write. And a confession here, I personally love the “research” that predates actual writing.

Reading up on the Gupta-Vakataka period threw up so many interesting, enjoyable vignettes that I have tried to include in The Curse of Anuganga – partly as they occurred, while fictionalising a bit. For example, after the death of King Rudrasena II, Queen Prabhavatigupta took over the Vakataka kingdom as the Queen Regent on behalf of her two sons, Prince Divakara and Prince Damodara. It is Prince Damodara, the younger of the two Princes who succeeds her as the King in 410 CE. What happened to Prince Divakara is something that does not come out at all in most available historical material. A brief mention in one of the books on this period indicates the passing of Prince Divakara approximately circa 404-405 CE.  In my story, which is set in 403 CE, I have used this as a sub-plot.

Before I get too carried away with these little historical tidbits, I will stop. For those of you interested, The Curse of Anuganga is about a young man, Shaunaka, a jeweller’s son who lives in Nandivardhana in 403 CE. His life changes when he ends up helping the local police solve a murder he accidentally stumbles upon. The deceased man, Vinayashura, is an affluent trader with mysterious links to the royal family in Nandivardhana. The rest of the story is about how Shaunaka helps the police figure out who killed Vinayashura.

The Curse of Anuganga is available in bookstores across India and on Amazon (both the US and the India site).  You can also read a small excerpt that was featured in The Statesman here.

3 thoughts on “The Curse of Anuganga is out …”