I have been meaning to restart this blog for a while – the hiatus, as before, was entirely unplanned – as work and other real-life matters took up much precedence.

Many unfinished drafts later, finally back here with a movie review.  Why this movie?

I read Asha Parekh’s autobiography, The Hit Girl some months back and this triggered a renewed interest in her films.  Not that, the interest required any triggering – I confess, I do have a soft spot for the type of light-hearted movies she starred in, in the late 1950s and early 60s.  And it also helps that I am fortunately blessed with a spectacularly bad memory when it comes to movies – scenes, story, all are forgotten. Which means that I can watch the same movie an umpteen number of times, with the same sense of interest. (Of course there is a vague, niggling feeling that I may have seen it before.)

Ziddi (1964) is one such movie. I know I watched it in another century (literally) when Doordarshan aired it. However, barring the vague recollection of the Yeh meri zindagi song picturised on a sad Asha Parekh (in a lavender saree, or so I thought) I did not remember a thing.

Once past the credits, we are introduced to the wealthy Shankar family helmed by the strict patriarch Rai Bahadur Sachin Shankar (Ulhas), a retired judge, who has three sons and one daughter. The movie begins with a scene at the breakfast table. Two of his sons (one of whom is a doctor) and their wives and Shankar’s daughter (a budding classical dancer) are present on time for breakfast. The one missing is the youngest Ashok, a budding writer, who is the bane of his father.

At the very moment, Ashok is with a publisher who gives him negative feedback about his writing and that his stories/ writing belong to the dustbin He also tells Ashok he cannot become a writer as he does not have the face of one. How exactly is a writer supposed to look like? According to the publisher to whom this question was posed, a writer has a unique face. (Umm, don’t we all?)  The conversation is interrupted by the arrival of Mr. Chatterjee (Asit Sen) who is, thankfully, not a writer. The publisher (presumably of a newspaper, again not explained actually) informs Mr Chatterjee that he has landed the job of a manager at a tea garden estate, which also includes taking care of their daughter, Asha (Asha Parekh), a gun-wielding, animal-loving dangerous young lady. She loves tigers, lions, elephants and horses and dons clothes of a man (jo mardon wale kapde pahenti hai) and puts them down. Her harassed parents are fed up of her overall behaviour and also her misandry and are worried that she may one day kill someone. Mr. Chatterjee is absolutely petrified and starts making excuses about how he may not be able to leave for Ooty that very day and scoots from there.

Our jobless (and fairly useless) Ashok however is very fascinated as he stares admiringly at the photograph. He decides that he shall keep the photograph as this girl would be able to make him a writer.  Since this girl is the most beautiful and interesting person he has ever met, he is sure that she will transform into a writer! (Somebody please tell Ashok that to become a writer one needs to write, not look at photographs! I hoped that the publisher would. But of course, hero has to meet heroine and story has to move forward. Hence no such advice can be imparted by the publisher.) And by the way, the lady in question apparently has a unique face, which prompts a song, a paen to her. With his new-found purpose in his life, Ashok spends the whole day singing to the photograph. This is how his aghast family find him, singing near the swimming pool of a five-star hotel, late that evening. An argument ensues and the worried father decides to have him examined by a medical professional. Ashok has a diagnosis – he is apparently lonely. Sachin Shankar does not get it (to be honest, neither did I). But it is apparently that kind of loneliness that afflicts young men of a certain age. Ashok completely agrees with the doctor up until the cure is prescribed. Hence Ashok must be married off and the family decides to embark on a bride-hunting spree. Ashok protests but fall on deaf ears. To escape this fate (and to avoid becoming a donkey according to him) Ashok runs away from home in search of romance and adventure. And of course we know where he would find both of these! 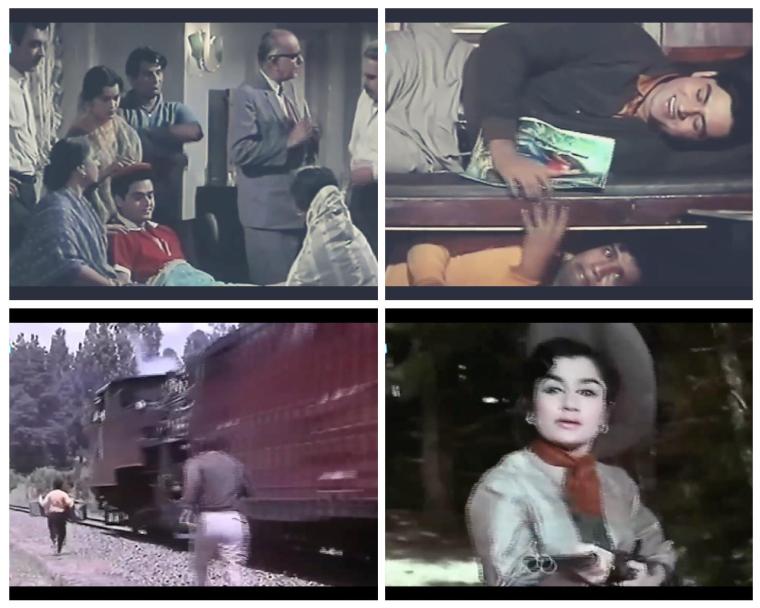 Adventure he finds rather quickly, enroute to Ooty, when his luggage gets stolen. And in the process of running behind the thief, Ashok lands up in the jungle where he comes face-to-face with the lady in the photograph who is busy chasing a donkey (a real donkey not our hero!). The brief encounter is as expected. She is wearing mardon wale kapde, toting a gun and all ready to shoot the donkey. (I wished by now that she just shoot Ashok and then herself and spare me the torture. In just 5 mins of her appearance, Asha Parekh in this role proved to be exasperating.) Sparks fly, and soon Ashok lands up in the tea estate where he is mistaken to be the manager. By the time the real manager (Asit Sen) shows up (which is conveniently taken care of), Ashok has inserted himself happily in Mahendra Tea Estate not just as a reliable manager but also into their household, which comprises Thakur Mahendra Singh (Raj Mehra), his wife (Sulochana), and daughters Asha and Seema (Nazima). The sisters are not particularly close and are poles apart. Ashok also is very pally with their driver Mahesh (Mehmood) who is in love with their old hand Ramdas (Dhumal)’s daughter Sheela (Shubha Khote). This sub-plot wherein Sheela and Mahesh try to meet without her father’s knowledge and carry on their dalliance is there to infuse comedy in this film and runs parallel to the plot.

As you can expect, Ashok and Asha do fall in love with each other (after many inane scenes which probably were meant to be funny. Most of these feature an elephant Majnu as well.) Ashok, in his bid to make Asha fall for him, uses the age-old trick of making her jealous by showering all his attentions on her sister. As expected, Asha suddenly stops wearing her mardon wale kapde and becomes into a demure, shy lady and Seema also falls for him! Thakur Mahendra Singh decides then to make Ashok his son-in-law and our dear runaway hero finally contacts his sister and family and lets them know of his whereabouts. They are asked to come and meet their hone-wali bahu. And so the Sachin Shankar khandaan descends upon Ooty.

All would be well but for the fact that the old Judge recognises Thakur Mahendra Singh. Sachin Shankar remembered the Thakur as being the friend of a criminal Moti (Madan Puri) who had murdered his wife, a prostitute. The Judge remembered sentencing this Moti to life imprisonment and recalled that the Thakurs had adopted Moti’s daughter. Incidentally, an ailing Moti, who is now a fugitive after having run away from the jail, lands up wishing to see his daughter before he dies. 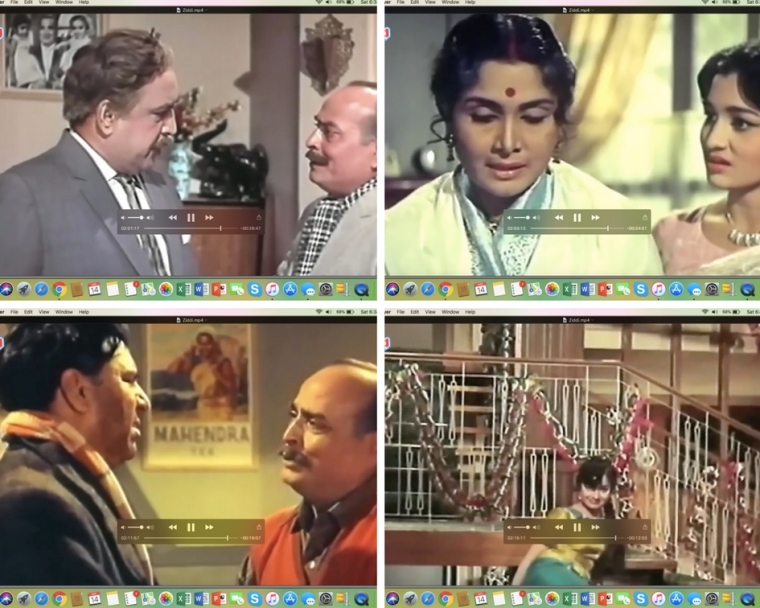 Was Asha the same girl? If so, then of course could and would this match proceed after all the objections the judge had regarding her khoon? Does she find out she is adopted? What happens to Seema when she figures out that she has been taken for a ride?

The hurried last ten minutes of the movie attempts to answer all these questions and provides an utterly contrived resolution.

Please avoid, if you have not seen this. Asha Parekh and Joy Mukherjee have acted in much nicer movies (Phir Wohi Dil Laya Hoon, Love in Tokyo for instance).  Asha Parekh is screechy as she portrays the extremely spoilt and obstinate Asha. Also the characterisation is weird. Her transformation from a ziddi ladki to a docile and susheel ladki happens almost overnight. She overhears Ashok tell Seema that he likes saree clad women and next scene onwards she is saree-clad. Her reaction upon finding out that she is their foster daughter is also strange. Instead of feeling grateful, she promptly gets drunk, wallows in self-pity and makes a complete scene singing Yeh meri zindagi ( so my memory was off the mark. The lavender saree that I seem to remember is from a couple of  scenes before the song one!) And where was the need to portray Ashok as a wannabe writer? He wasn’t shown writing a word during the course of the movie. And once he met Asha, all pretensions of wishing to become a real writer were also dropped. Oh yes, there were references once in a while to that editor in some dialogues.

S.D. Burman is one of my favourite music directors. However this score isn’t one of my favourites. The Lata Mangeshkar solos, Raat ka sama and Yeh meri zindagi ik pagal hawa are absolutely lovely. And the Rafi-Asha duet Champakali dekho jhuk gayi is also melodious. There are a couple of hummable Rafi solos too Pyar ki manzil mast safar and Janu kya mera dil.

A waste of time, with a fairly inane plot and irritating acting, this movie can be avoided.

Transitioning into my next 50 years