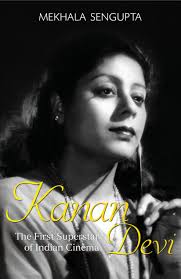 I came across this book sometime last year when I was trying to educate myself on the early days of Indian cinema. Since my interest in Indian cinema is in movies from 1950s and onwards, when it comes to the two preceding decades, barring certain iconic names such as K.L. Saigal, Pankaj Mullick, Devika Rani, Himanshu Rai, I know nothing more.

Which is why this book stood out.

Kanan Devi was a name I had heard, courtesy, Lata Mangeshkar’s album from the 1990s, Shraddhanjali: My Tribute to the Immortals wherein she had reprised a couple of Kanan Devi’s superhit songs from Jawab (1942) – Aye chand chhup na jaana  and Duniya yeh duniya….Toofan mail  .And it was about a time period I did not know much about.

I finally got around to reading this book earlier in the year.

Since yesterday (April 22, 2018) was the 102nd birth anniversary of Kanan Devi and today is celebrated as World Book Day, it seems apt to commemorate these days (and yes keep the blog active) with a post about this book.

Written by Mekhala Sengupta and published by HarperCollins in 2015, this is a well-researched account of a superstar, who “spelt charm, glamour, dazzle and grace to the fledgling Indian middle classes (of the 1930s and 1940s)” but one whose name rings no bells these days. Retracing the life and times of someone about whom countless tales abound must have been a challenging task, but the author succeeds in doing so to a large extent. By the time, one is done with the book, the reader is acquainted with Kanan Bala or Kanan Devi, a fascinating personality, who through her single-minded focus and independent thinking scaled heights in both the Hindi and Bengali nascent film industries despite having no lineage or pedigree. An inspiring rags-to-riches story, the book details the achievements and journey of this Diva who donned many hats – child-artiste, internationally recognised superstar of both silent movies and talkies, singer par excellence, producer and fashionista.

Born on April 22, 1916 (or 1912 according to some accounts) in Howrah, Kanan Devi’s origins are dubious. Many accounts exist about her lineage (or lack of it). It is not clear as to who her parents were,  but she was under the care of Rajobala Devi and Ratan Chandra Das whom she considered her parents. There is also a mention of an elder sister, Amiya. Kanan Devi in her own autobiography, apparently recollects her early childhood as being happy when her father Ratan Chandra Das was alive. Ratan Chandra Das, in a brief time, played an important role in her life, recognising her talent for music and encouraging it.

As a child, Kanan Bala was said to be quiet and much of a loner, lost in her own world of daydreams, triggered by books she had read and the melodies she heard (of Baul singers, local pooja pandals, jatra theatre.) She was attracted to music and would often get lost, drawn by music and would have to be brought back home. Calcutta, in those early years, was a happening place and attracted popular entertainers, be they circus artistes, jugglers, musicians, dancers and actors. There indeed was much to see and hear.

However, Ratan Chandra Das fell ill and died shortly after. Rajobala, while not being married to Ratan Chandra Das, took upon herself to repay his debts and sold all her jewellery and household articles in the process leaving both her and little Kanan destitute and homeless. Kanan was hardly six years old and from then on the rest of her childhood was difficult, filled with penury, hardship and humiliation. Rajobala had taken to doing chores in homes of wealthy people in Calcutta and Kanan would help her. At an age when she should have been going to school and getting some kind of an education, Kanan Bala was getting real-life experience, working as a maid and living in a notorious neighbourhood.

There is a rather telling anecdote in the book. At one point, Rajobala and Kanan were forced to live with well-to-do relatives in Chandernagore (according to an account the relatives were this elder sister Amiya and her husband Bhim Singh). Instead of living there as family, the mother and daughter were forced to work long hours as unpaid domestic help and were treated badly. Things came to head one day, when Rajobala broke a saucer and was badly reprimanded and humiliated by these relatives. This was the last straw for Kanan Devi. She took her mother and left the house. Despite not knowing where to go and what to do, one thing was clear in the young seven year old Kanan’s mind. It was better to die of starvation than to suffer this kind of humiliation.  A  lesson that she learnt and followed life-long. Her self-respect was prime and that was one thing she would not compromise. Incidentally she never lived in someone else’s house again. Even after her marriage (both times), it was her husband who moved into her house. Self-respect, dignity and independence were the guiding principles of Kanan Devi’s life – a feminist in the true sense of the term, much before the term had gained prominence. (Ironically, this Amiya and her husband were to come to Kanan, once she became a big star and seek her help. While she did not wish to help them, it was Rajobala who insisted that Kanan forgive them. She did and the couple lived off Kanan’s money thereafter.)

After this brief Chandernagore sojourn, the mother and daughter were back in Howrah, in a notorious neighbourhood, known for its brothel, somehow trying to make ends meet. It was a period of extreme financial distress, one during which she remembered being perpetually hungry and near starvation. Kanan Devi was on the lookout for any opportunity to get out of this rut, without compromising on her self-respect.

She was just ten when she met Tulsi Banerji, a character actor in theatre and nascent film industry. Even at that age, Kanan Devi is said to have possessed striking looks, one that got Banerji to notice her. It was Banerji who introduced Kanan to his contacts at Madan Theatres Limited. Her screen test was successful as the owner of Madan Theatre and the director spotted the budding diva in her and she was selected. Kanan Devi made her debut in the silent film Jaidev (1926). She earned a princely sum of Rs 5 per month for the movie, which solved their financial hassles for a while. Kanan was to find out much later that she had been contracted for Rs 25 per month but the staff at Madan Theatre happily whittled off the rest!

Those were tough days. She was a mere child who found the arc lights of the studio very harsh. Waiting in full costume for the director’s instructions was also tough, especially when one could climb fruit trees or just day dream in a corner. There is an amusing anecdote of how the ten-year-old child had once climbed a guava tree to pick fruit, as she had gotten bored waiting for her shot and had promptly fallen asleep, triggering a studio wide hunt for the missing child. Jyotish Banerji, the director slapped and reprimanded her when she had been located for wasting everyone’s time. It was yet another lesson she learnt. Kanan Devi thereafter made it a point to reach at least 10 minutes before any appointment. She had learnt to value people’s time and recognised the need to be disciplined and professional. Her career saw a brief hiatus between 1928-31 due to reasons unknown. It was a period where she continued with her music training and collaborated with the music composer Hiren Bose and lyricist Dhiren Das and the poet Kazi Nazrul Islam and brought out several recordings.

At the age of fifteen, Kanan Bala returned to the movies with the talkie Jorebarat (1931) and this was the phase when she transformed from a cute child artist into a beautiful girl approaching womanhood. Her  expressive eyes, long limbs, and aristocratic mien contributed to the oomph factor. As a young girl in a notorious industry, she had to face much harassment from known directors of those days, thanks to her charms.  Kanan Devi, who valued respectability, maintained her distance and was very clear in her stance. She would not give in to any relationship that was not respectable, nipping several admirers in the bud. She lost many opportunities and rejected several monetary offers because of this adamant stance. She recounts that in one particular case, the director, considering himself an aggrieved party, vilified Kanan and made her life miserable on the sets of a movie they worked together in. It was during her stint at Radha Film Company (from 1933 onwards) that Kanan Bala became Kanan Devi the superstar, “the highest paid woman artiste and Bengal’s best-known female singer-actor” She had also started gaining popularity as a fashion icon becoming the pin-up girl of those times.

Kanan Devi had arrived. The rest of the book is about her iconic career, where in she donned several hats – singer, actor, producer, activist and her turbulent personal life, taking us through her two marriages, one with Ashok Maitra (1940- 1945) and with Haridas Bhattacharjee (1949-1992).

Several things stand out about this remarkable lady.  At her peak, in the 1930s, keenly aware that she could not get a traditional education, Kanan funnelled some of her money and hired a Panditji to teach her the epics and the Puranas. At the same time, she hired a teacher to teach her English and another tutor to educate her in Bangla, Maths and History. It was a phase where she spent her time on the sets, reading voraciously, in between shots. She also made it a point to learn music formally from stalwarts such as Alla Rakha during this phase.

It seems that her low and dubious origins and lack of any lineage did play on her mind, considering her counterparts such as Devika Rani and Sadhana Bose were from cultured, well-known families. But through her single-minded focus and discipline, Kanan Devi transcended her origins through education. She did credit her first husband, Ashok Maitra (who hailed from a reputed family) to give her social recognition and status in conservative Bengali society. Despite the marriage being short-lived, Kanan Devi maintained a good equation with Ashok Maitra’s mother and sister, Rani Mahalanobis and her husband P.C. Mahalanobis, through her life.

By the late 1940s, when it was clear that the old studio system had given way to independent film makers and most opportunities were either in Bombay or Lahore, Kanan Devi took an interesting decision. In order not to relocate to Bombay, she decided to quit acting and turn producer. This is what stands out about Kanan Devi’s personality – she was bold, decisive and gutsy enough to take unconventional decisions through her life. Her discipline and forward looking focus all paint the picture of an independent, resilient, sensible woman who did not rest on her past laurels but instead went ahead and took whatever opportunities came her way. Admirable indeed.

Crammed with numerous interesting anecdotes that help unravel the personality of a performer who may not be well-known today, but one who is, arguably considered, the first superstar of Indian cinema, Kanan Devi: The First Superstar of Indian Cinema is a fascinating book. Definitely worth a read!